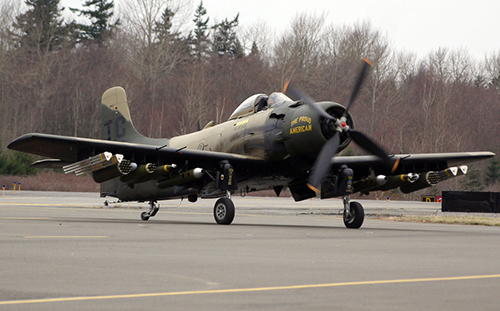 The Douglas A-1 Skyraider (formerly AD) was an American single-seat attack aircraft that saw service between the late 1940s and early 1980s. With its propeller it was an unique aircraft between all the jets, and was nicknamed 'Spad', after a French World War I fighter. The Skyraider had a remarkably long and successful career, and was eventually succeeded by the A-6 Intruder, a two engined, two seater, carrier based strike bomber.

The Skyraider came too late to see action in World War II, but in Korea the aircraft was the backbone of the US Navy and the Marines. But the Skyraider really became famous during the Vietnam conflict. Although by than Navy squadrons were already transferring to the heavier A-6 Intruder, the Skyraider continued to operate from the smaller Essex class carriers. The A-1 was famous for being able to take hits and keep flying. There was added armor plating around the cockpit area for added pilot protection.

The Skyraider in Vietnam pioneered the concept of tough, survivable aircraft with long loiter times and large ordnance loads. The USAF lost 201 Skyraiders to all causes in Southeast Asia, while the Navy lost 65 to all causes. Of the 266 lost A-1s, five were shot down by surface-to-air missiles (SAMs), and three were shot down in air-to-air combat; two by North Vietnamese MiG-17s, and one by a North Vietnamese MiG-19.

Air Force Skyraiders in Southeast Asia are probably best remembered for their support of search and air rescue missions. Operating under the call sign Sandy, the A-1's ability to fly over a downed Airman for an extended period complemented its massive firepower. Whereas jet aircraft often had to leave an area for refueling or rearming, the Sandies provided nearly continuous suppressing fire until helicopters could extract downed Airmen.

In this role I wanted to built the Tamiya A-1J Skyraider.

The kit is a typical Tamiya model. Clean, just crisp enough in its detail, with clear instructions and detailed color call outs. The decals on the other hand only give two different schemes. Aftermarket decals for the A-1J aren't widely available too. When I started this project I planned to build a 602nd SOS squadron aircraft, the "Tiny Tim". But creating the necessary decals never succeeded in something useful. I still wanted to built a "Sandy" with a black underside, but not the standard kit's 014, because the web is crowded with this model.

What remained is a "What if" model with a nice historic twist.

Building the kit is a joy. The directions are clear, the fitting is good and the parts are still good after all these years. As usual I choose to give the kit some more detail by adding a set by Eduard. Most of these parts went into the cockpit and the weapons, and they pay off.

There is nothing wrong to this classic Tamiya kit. Recommended.