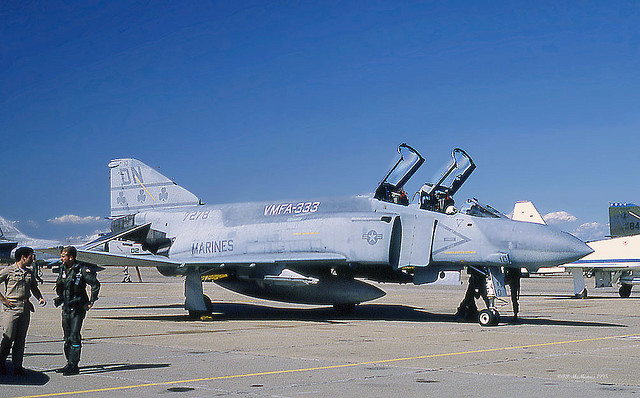 The Phantom is a legend. The history of the McDonnell F-4 Phantom II is long and exciting. First flight was in May 1958, entered operational service in October 1961, and is still in service with the air force of Greece and Turkey, it also served with the air forces of the United States (USAF, Navy and Marines), Egypt, Australia, Germany, Iran, Israel, Japan, South-Korea, Spain and the UK. With a total of 18 different variants and 5195 build the aircraft had a big influence on air combat the last 50 years.

The Phantom is definitely not one of the most beautiful aircraft flying around, nor the best air superiority fighter or the best fighter-bomber. But the aircraft has shown it could execute all the tasks the air forces asked for. 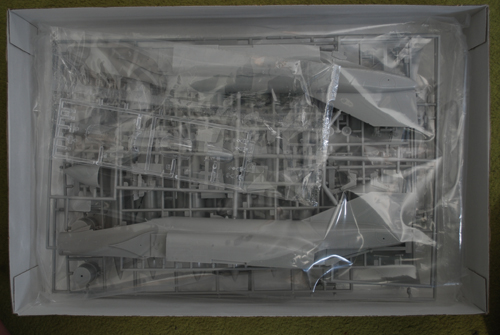 The model is molded in light grey and the parts are excellent detailed. A nice extra are the sidewalls for the rear cockpit that make the difference between the Navy and the USAF Phantom. Another extra is the PE-sprue with the Sierra's particular reinforcements for the wings.

The directions are straight forward and you can build the model in just 10 steps, with only step 8 a bit crowded.

Color numbers are given in Mr Color, but an added list gives you also the FS numbers of the most important colors.

As usual construction starts with the cockpit. Step 1 begins with the ejection seats, but these I put aside for the time being. The Eduard set is very nicely detailed and will improve the office considerably. But the first problem surfaced. According the references the cockpit is painted in FS36231, equal to Model Master 1740. But the colored parts of Eduard are much lighter and even a bit blue. I had three options: 1. Doing nothing about it (not an option), 2. Repaint the PE-parts (and lose the details), 3. Pick another color for the cockpit (and lose the reality).
I went for option three. After checking all my shades of grey in the box, French light blue gray (Model Master 2109) was the most alike. And maybe it is the scale effect, but it looks much more like the original.
Time for the seats... It is than that I notice that the Eduard set comes without seat belts! Is this something Eduard has learned from Hasegawa, selling extra's separately?! Eduard does have a couple of sets with different sorts of seat belt and Lucky Model does sell them without shipping costs. I also quickly checked my other kits on the stash and I noticed Eduard did the same with the Hobby Boss F-105G kit, but not with their A/F-18D kit. So be aware when ordering Eduard add-ons.

The intakes of the Phantom are a prominent part of the aircraft, so I decided to place full depth intakes. A search on the internet finally left my two available choices at that time. The Seamless Suckers ones and the DMold 48008 seamless intakes, which were my choice. I have never installed resin intakes before so cutting, drilling and sawing into the fuselage was a bit scary. But eventually I managed to fit the new set very well.

Building the aircraft itself is pretty straight forward. Hasegawa kits are just a fine piece of art and no serious problems appeared during the build. However, a couple details I changed on the model.
First the navigation lights. As usual I cut out the molded grey plastic navlight and replaced them with clear sprue, sanded into shape. I also cut out the flaps. A Phantom on the ground normally has its flaps dropped. With a fine saw I removed them from the wings, reshaped them and glued them back in a dropped position.
Finally I added a scratch build boarding ladder.

And then disaster strikes. With every kit I build something goes wrong. I drop the model, loose an important piece, forget to check references or fail to look at the directions. With this Phantom two things went terribly wrong.

Disaster one was destroying a canopy. A scalpel with some Tamiya putty was put aside after filling some seams. The next day I noticed this scalpel was resting on the front canopy. The putty ate a deep hole into the plastic. Repairing was out of the question. But an e-mail to the distributer of Hasegawa quickly was replied with a question of which part it concerned and where to send it to. Nice!
After painting and decaling the kit, the decals on the tail silvered. I tried to fix it but after a while I decided to put this problem aside. First I had to paint the tail section behind the engine. But after taking of the tape I also ripped of a large part of the decals on the tail section. Bummer!
Now, what to do. Ordering a new set of decals? Use different decals from another plane? Paint them on? Then the idea came to make them myself. There is some good stuff you can find to make your own decals.

Here is what I did.
I searched the web for a high resolution profile of an F-4 of the VMFA-333 and used this as a master for making the decals with Photoshop.

The picture on the left shows the master I used for the shape of the figures. The middle picture shows the print I made with Photoshop. The four colored dots were used to check the colors not washed out by the seal and water. The right shows the applied decals.
The paper I used was clear inkjet paper by Testors. The prints were prior to applying sealed with a brushed on coat of Microscale liquid decal film.

Like every Hasegawa kit this Phantom is a masterpiece and a joy to build. There is one extra I want to mention: the Aires (4118) exhaust nozzles. This add-on is worth every penny. Overall, highly recommended.