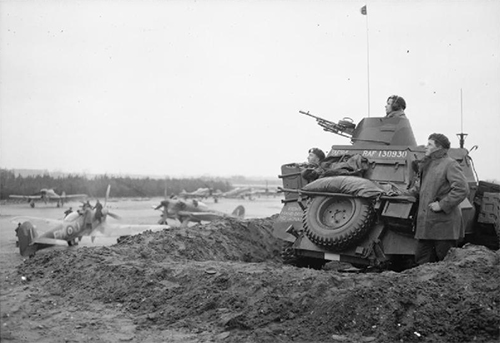 My father, borne in the year 1934, tells me and my family sometimes stories about World War II.
One of this stories he told us lately he had told me before, but I never took the time to do some rechearch on that story.
"We were playing when suddenly a huge bomber came down. We thought for a moment it would crash into the cemetery, but then it pulled up and banked right. The plane just missed a dike and hit the ground inbetween some trees. The Germans rushed to the crashsite and kept us on a distance. The local doctor was also summened to the crashsite."
This, including a limited timeframe and a spot on a map, was about the only information I had at that moment.

The story took place in the winter of 1944-1945. It was cold, there was ice on the water, but no snow yet.
The verliesregisters show that in January 20 no less then 3 Typhoons crashed in the vincinity of Dubbeldam, a small town near the town of Dordrecht.

The location where the crash took place was the Biesbosch, a large stretsh of farmland and tideland south of Dordrecht and Dubbeldam. My father could pinpoint the actual crash site.

F/Lt H.Y. Lao died in the crash in the Aloise Polder, just east of the crash site of the MN696. P/O E.W. Whitmore crashed even more to the east of the MN696, probably near De Kop van het Land. Whitmore survived the crash and managed to escape from the Germans. W/O K.E. Button crashed near Wieldrecht and didn't survive. It was Button's aircraft my father saw crashing.

The morning of the crash my father was playing with some friends near a water lock when they suddenly saw a Typhoon diving from the south-west straight to a cementary. The aircraft pulled up and turned south, but after a nearmiss with a dike the aircraft crashed into a some trees. My father and his friends ran to the crash site, but were held back by the Germans who looked afraid of the crashed Typhoon. The local doctor was rushed to the crash site, but Button must have been dead by that time. 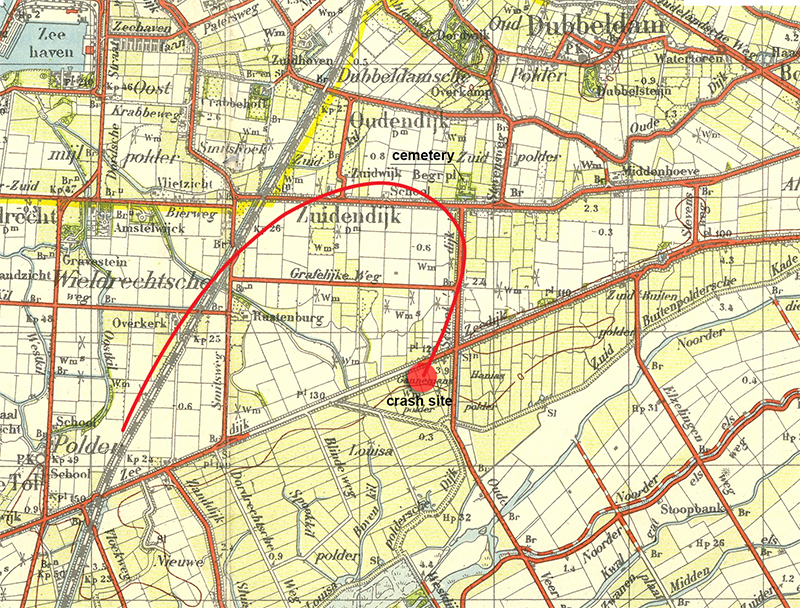 A reconstruction of what happened that fatal saturday morning on 20 january 1945:

That morning the planes of 257th squadron were assigned to attack a bridge near the city of Leiden, referred on the map as location E.193864. Flight Lieutenant Lao and Warrant Officer Button were walking to their planes. Lao looked up to the clouds and shivered. "Yes sir", Button said:"it is cold to day to fly." And after a short silence he added quietly: "Too cold..."

The Napier Sabre engines came grumbling alive and they taxied across the white field of B70, before the war better known as Aerodrome Deurne. Soon after takeoff Button found the FM-V, piloted by his leader and he joined formation. While they waited for all other aircraft that were assigned to the attack that morning, the FM-T also joined the formation. When all the aircraft were airborne Flight Lieutenant Lao gave the order to head north. The three Typhoons stayed close while the overcast was getting thicker and lower every mile they headed further north.

When the crossed the border they had to spread their close formation because of the degrading visibility. Suddenly, after the passing through another dark cloud, Button noticed his aircraft wasn't hardly reacting anymore on his control inputs. "Am I hit?" was his first reaction, but they didn't cross the frontline yet. He tried to figure out what the problem was when all of a sudden flak exploded around him. They had crossed the Hollands Diep and were now over enemy territory. As piece of flak hit is windshield he realized with a shock the nature of the problem. "Ice!" He was right that morning, it was too cold to fly. And now his control surfaces were all iced up. Just over enemy territory, not a good place for problems like this.

"Yellow two is RTB." he told his flight leader over the radio. No response. When Button was able to turn the Typhoon back south he might be able to get over friendly territory, he might even make it back to Eindhoven. Turning the aircraft carefully with its rudder he managed to make a slow flat turn to starboard. But with its elevators stuck the nose began to descent and now pointed towards a cemetery. Button pulled as hard as he could on the stick and the nose raised again, but the action also made his starboard wing dipping. He pushed hard on the port rudder and the wings began to level again. "Too low to bail out," he thought in a flash. With hardly any control over the plane now, he would hit de ground very soon. While Button was cutting on the throttle he saw a dike appare straight in front of him. With a last effort he popped over the dike and hit the ground in between some trees just a couple of yards behind the dike. The Typhoon's large radiator digged deep into the frozen ground causing the aircraft to decelerate rapidly. Button was thrown forward against the instrument panel.

Warrant Officer Button never saw the Typhoon of his leader coming down just a mile to the east. 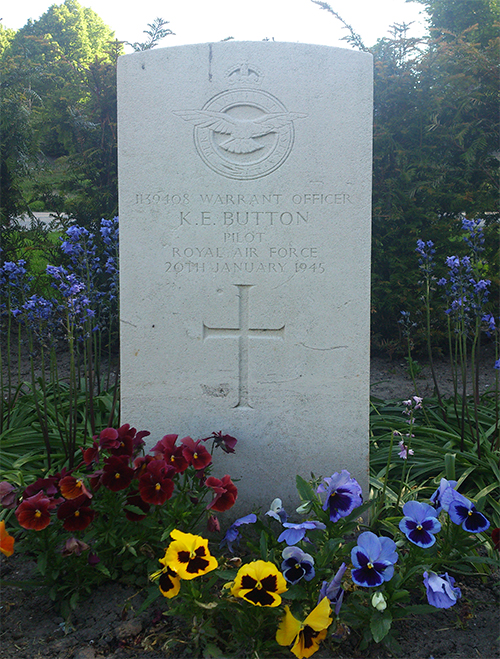 Hasegawa released in late 1998 a new tooled kit of the first production Typhoon, commonly referred to as the “Car Door” canopy version. With this kit as a base Hasegawa released two versions of the later production “Teardrop” canopy Typhoons (one with a three blade prop while the latest release has a four blade prop). The Typhoon I built came with a three blade prop, but for building the MN696 I ordered a resin four blade prop.

Hasegawa kits are, as usual trouble free and, even though this kit has inserts for the separate "Car Door" version and the "Teardrop" version, a good fitting. Details are good as well, but Eduard PE parts are always a welcome extra. Set #275 adds some nice cockpit details and radiator details. The Hasegawa kit comes with two different markings. For the FM-K I ordered extra RAF codes in sky. The aircraft code MN696 was made with custom decal paper.

Actually there is not much to tell about the kit. It's just a high standard Hasegawa kit that comes together quite easily. The kit's three blade prop was replaced by an Ultracast four blade prop without fitting problems too.

Building this kit was on the other hand a personal record: Just two months from box to diorama.

From the beginning I built this model as a present for my father. A good (save and dust free) display was mandatory. On Ebay I scored a Trumpeter display case and at Lucky Model I ordered the Legend Productions RAF pilot (Douglas R.S. Bader). On the display base I glued a piece of railway modeling grass which I sprinkled with white chalk. This was sprayed with water and this way I created a thin layer of snow. The aircraft and the pilot model were fixed with glued in pieces of copper wire which went through the base. The placard is a piece of styrene with a custom made decal. 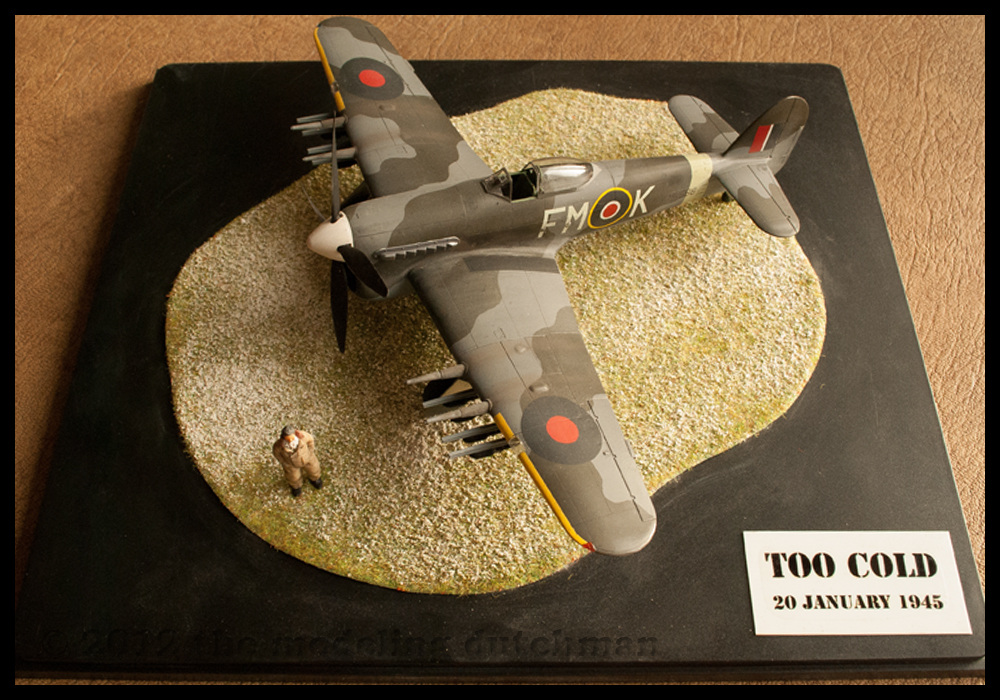