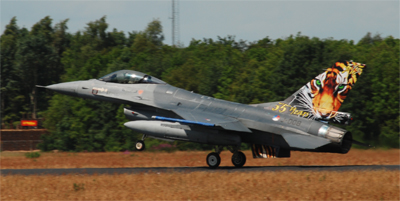 There are many models available of the F-16. It is probably one of the most famous aircraft for a model. I can remember building at least two F-16's before. A 1/48 model, I can not recall the brand, and the vintage 1/32 Hasegawa F-16A.The model dates from at least 1977.

Today Hasegawa as a nice collection of F-16's, and Tamiya's 1/48 and 1/32 models are state of the art. Kinetic is a new kid in town, delivering kits that everybody wanted, but never were available, like the Hawkeye and the Prowler in the 1/48 scale range. Another relatively new kit range by Kinetic is the F-16. At the moment Kinetic has 11 different Viper models available.

One of the models is the F-16A MLU, block 15, also known as the F-16AM. This particular aircraft is widely used by the NATO, including the Netherlands Air Force. As a Dutchman I always wanted to build a dutch viper. During the Open Days of the Netherlands Airforce at Volkel in 2009 I saw an ex-Tiger Meet F-16 participating in a air-power demonstration. The Tiger Meet tail was one of the best I had ever seen.

The J-008 came in service with the Royal Netherlands Airforce in 1991 as a F-16A Block 15AG OCU and is currently upgraded to Block 20 MLU. In the year 2008 the special 55 year anniversary Tiger Meet painting was applied. This painting has lately been removed.

The Box of the Kinetic kit is very well filled with sprues. A large part of the spues contains a good arsenal of weapons. Enough to fill your spare part box anyway. 3 Fuel tanks, 2 different types of LANTIRNs, Litening, Sniper XR, ALQ-131, 4 of each Sidewinder type M and X, 4 of each type AMRAAM B and C, Mavericks, Pinguins, Mk.82's, Paveway II and III, JDAM's and CBU-87's. That is more then a regular Hasegawa Weapons set!

Kinetic is a new player in modeling land, a good one for sure, but there is one draw back. The moldings are definitely not flash free and the molding technology that they are using leaves mold tabs where the ejector pins push the sprues out of the molds. Big, thick and nasty pins which most of the time need to be removed before putting the part together.

I started eventually with the kit's own cockpit, but very soon I dropped this one and ordered the Aires add-on. Because this resin cockpit was meant to fit in the Hasegawa kit it needed a lot of trimming to squeeze it in the smaller(?) body of the Kinetic kit. The Kinetic body seems to be of a different shape then the Hasegawa body. I guess the Hasegawa one is more correct, but since I am not tend to put them together on one shelve, I think it will not really be noticed.

The wheel bays, including the landing gear have to be assembled before it they are placed into the hull. This means you have to be careful while handling the model during the process.

I filled the bays with some extra wirering and tubes.

When the body was smooth enough for the paint job I started with the ring just before the exhaust which I painted with Alclad polished aluminium. Then I pre-shading all the panel lines. After that I sprayed the underside of the aircraft with Humbrol US Ghost Grey 127. Next came the nose section the tail and a part of the intake with Humbrol Satin US Medium Grey 126. The rest of the body was done with Humbrol Satin US Dark Grey 125, except for the nosecone which is painted with Humbrol US Compass Grey 128. All layers were sprayed very thin so the pre-shaded panel lines kept visible.

After sealing the paint with several layers of Future it was time for decaling. I was quite nervous when the tigers had to be applied. The Syhart decals are printed and before I used them I took a piece of the decal sheet to see what the reaction on water, microsol and Future was. Luckily no problems. First the white parts of the scheme had to be applied, and when those had dried, the rest of the scheme was applied. And that was to most difficult part, the lines had to fit perfectly.

The rest of de decals, except for the J-008 numbers and a couple others that came with the Syhart decals, I used the original ones. After all the decals were applied, I sealed them with a coat of Future and than I sprayed the whole model with a layer of Testors dullcote.

No extra weathering was applied besides some wash in the wheelbays and the exhaust. 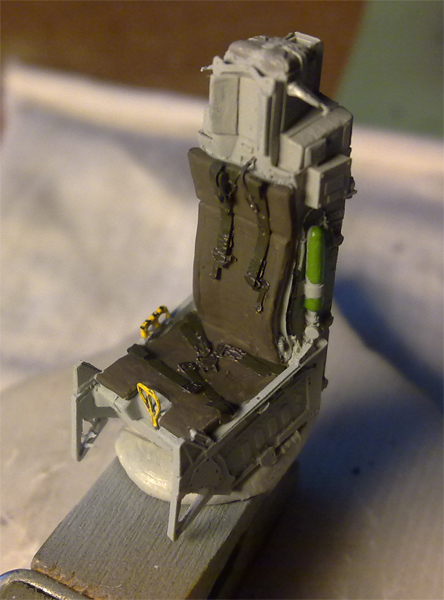 The kit has a pretty good seat, but the Aires cockpit-set comes with an even better one. The resin seat looks amazingly good detailed, and with a little help of reference photo's I managed to make it a real ACES II seat. The photo-etched parts the belong to the Aires set are a little hard to handle, but glued to the seat the look right.

As already mentioned the kit comes with a mega load of weapons. The temptation to overload the aircraft is big, but a choose a typical air-to-air configuration.
- two underwing fuel tanks
- two AMRAAM AIM120B's on the wing tips
- two Sidewinders AIM9L's under the outer pylons

This is a pretty good kit. It is not by Tamiya standard, but for the price you will get a lot of kit. However, to get a good looking Viper there is a lot of work to do. I do not have any experience with the Hasegawa and the Tamiya Vipers, but I think they are better.
But if you want a F-16AM, than Kinetic kit is your only choice, and not a real bad one.